When you search for acoustic or classical guitars, you’re hit with a number of articles helping you choose the best model out there. It’s rather common to see articles featuring the best acoustic or classical guitars for beginners, for budget-players or for skilled virtuosos. Yet we hardly see the lists that would feature unique pieces – guitars that have some sort of history behind them, come with weird building material or have an unusual body shape. And that’s why I decided to fill that gap and list down the most interesting acoustic/classical guitars that have ever existed. I’m sure you’re intrigued, so stay with me and let’s begin this journey together! 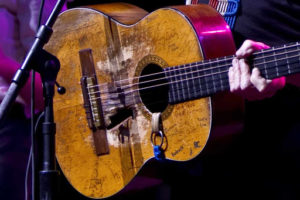 You might be familiar with Nelson’s name and music, but you might not know anything about his guitar. That’s a shame because it’s equally as famous as the guitarist himself. Willie called his Martin N-20 classical guitar “Trigger” because he thought of it as a horse. This guitar has gone through a lot – it’s covered in autographs and has a hole (nope, not a soundhole) in its body, yet it remains a loyal companion for the guitarist. Trigger is featured in Nelson’s renowned albums, such as Shotgun Willie, Red Headed Stranger and Stardust.

Have you ever heard of Dean V? If not, you’re missing out, my friend. V was an electric and bass guitar model released by Dean guitars back in 1977. Their distinctive design and sound brought fame to the manufacturer. These models were so renowned that the brand still pays tributes to them by creating newer ones till this day. Of course, they had to make an acoustic version. V-Coustic isn’t only a member of a renowned family, but it’s also one of the most interesting acoustic guitars out there. Though you’ll be able to find many queer shapes, V shaped acoustic guitar is a truly rare find. And the best part? This puppy sounds just as good. Its T-Wing soundhole adds even more uniqueness to the design and turns V-Coustic into a really distinctive piece in any collection.

Pagelli are famous for their queer, great-sounding instruments. This custom guitar manufacturer has countless distinctive pieces, yet there are some that I (and no one in this whole world) have never seen before. One of the most interesting models I found was Vals Quartzite Flattop 2013. What makes it so different? – you might ask. While it has a ziricote wood back and sides, the top is made out of Vals Quartzite (in case you don’t know, it’s a stone. Yes, you heard me, A STONE). It also features an integrated soundhole which lets the top of the guitar vibrate freely. Due to the peculiarity of top material, the team in Pagelli had to create holes in order to secure strings in the body itself. Never in my life would I have imagined that one day I’d encounter a guitar with a stone top. I guess there are masterminds who can bring to life even the craziest of our ideas.

Speaking of interesting-looking guitars from Pagelli, here’s another one I have never encountered before. Archtop 1998 looks like a piece of art – a rare painting that we just got our hands on. But it’s an acoustic guitar that acts as two distinctive models. With the cover on, it’s an archtop with f-like soundholes. In this position, it has a more compressed sound, which stands to reason considering the design. As you lift up the cover and unveil the center soundhole, the tone opens up immediately and you’re left with a perfect guitar for gypsy-jazz! If this guitar isn’t interesting, then I don’t know what is!

The fact that Cubist artists are inspiring isn’t news to anyone. You’ll rarely find someone who’d criticize Picasso for lack of talent – that’s simply not feasible. Such great painters have found their way to music, as well, particularly, to guitars. Kinkade Guitars has a model, Cubist Braque, which takes its motivation from Cubist masters. To be more precise, its concept was influenced by Braque’s ‘Bottle of Marc’. It reverses the tradition – if their paintings featured instruments, now the guitar is wrapped in a painting. Cubist Braque has a shorter scale and features G tuning. Even though there’s nothing special about its tonewoods, the design will definitely draw attention, even if you don’t understand a thing about arts and paintings.

I’ll be honest, it’s harder to find distinctive pieces with classical guitars. However, there are people who don’t satisfy themselves with existing technologies and manufacture state-of-the-art pieces. Florian Vorreiter is a skilled luthier who has put together Projector Classical Guitar. The first peculiarity you’ll notice will certainly be the soundhole. You won’t find a traditional middle soundhole here – this model has two soundholes on either side of the fretboard. This means that the guitar has a bigger vibrating surface, which, consequently, means louder, responsive, sustained sound. Projector model also has a Floating Bridge, which provides the player with more flexibility. It’s always interesting to see who innovation improves even the most classical guitars.

Probably one of the most interesting-looking pieces on this list, a harp Guitar, is a steel-string instrument from the acoustic family. Even the name indicates what it is, but let me make it clear – it’s any guitar that has additional unstopped plucking strings (regardless of the number). We can all agree that this fella doesn’t look anything like a conventional guitar, but that doesn’t mean it isn’t utilized by our favorite guitarists. Andy McKee, Robbie Robertson, Don Alder and Antoine Dufour play harp guitars occasionally. Regardless of the design and string number, harp guitars are used to widen the sonic spectrum and add more dimension to the sound. Apart from tonal advantages, they’re also distinctive pieces that will set any collection apart from the crowd. Win-win situation, isn’t it?

Yepes 10-string might seem like a typical extended-range guitar, yet you have to keep in mind that it’s a classical guitar manufactured in 1963. Incorporating additional strings was a widespread phenomenon at a time, and Yepes decided to add 4 strings to the classical guitar. The Ramirez Company became the manufacturer and the result was an instrument which has increased resonance. The concept of having 10 strings on a classical guitar was criticized by prominent classical guitarist Andres Segovia, but Yepes stood up to his remarks. After all, his creation solved a recurring problem of weak notes on 6-strings. “Modern” 10-string classical guitar has interesting looks, but its sound is what makes it so intriguing and unique.

Have you ever seen black diamonds embedded in a guitar headstock? I certainly have not. You’ll notice this feature on Black Diamond created by Rafal Turkowiak. But those beautiful and expensive gems aren’t the reason why this classical guitar made it to this list. Its uniqueness is all about Acoustic Tubes – special holes in the neck that reduce the mass, while increasing resonance. The guitar is equipped with a Wave-type resonator, which lets the vibrations flow freely throughout the body. Black Diamond is an unusual and interesting classical guitar; however, this beauty is really expensive to acquire. After all, it costs more than my annual rent.

I decided to save the weirdest piece for the last. After seeing a harp guitar, you might not be as surprised, but I’m sure this guitar will still amaze you. Luthier Linda Manzer built this unique instrument for Pat Metheny. Pikasso is a 42-string guitar – yet another one inspired by Cubist painters (Picasso, of course). It has four necks, two soundholes and two access doors. It took approximately 1000 hours to put together its parts. Not surprisingly, this beast weighs around 7 kg (14.75 lbs). You can imagine how skilled you should be to play such a sophisticated instrument! Pat had everything required to master Pikasso. If you’re interested, you can watch him performing on this guitar and enjoy those beautiful tones.

Would you have thought that acoustic and classical guitars could be so diverse? Well, they are my friend, even if we consider them as mainstream instruments. Sometimes we have to read stories like this to appreciate our beloved models, or get inspired to be more unique in everything we do in our lives. After all, it’s the distinctiveness that makes all these guitars so interesting!

View all posts by Elen